Banksy takes it to the Bank!

Banksy, the anonymous graffiti street artist, fascinates me! While Banksy's art unexpectedly pops up across the globe, HE remains elusive. Graffiti is illegal, trespassing and vandalizing property are illegal ... yet these are all at odds with the fact that his crime is HIGHLY VALUED. It is valued by the proletariat and artist enthusiasts alike. Banksy's street art and messages have permeated the minds of all!

His true identity is unknown to this day. What is known is that he was born and raised in Bristol, England and now resides in London. He grew up in the '90s in an era when graffiti, already the subculture in NYC, burst onto the scene in England. While most of the sources about Banksy are secondary, if you are interested in learning more about him then I refer you to HIS book, 'Banksy Wall and Piece', which is authored by HIM. Two other great sources are video documentaries about him titled "Exit Through the Gift Shop' and ‘Banksy and the Rise of Outlaw Art.’

From these sources, I learned that he had a complicated childhood, frequently tangoing with the authorities, sneaking around, and skirting the law. Based on his personal experience he felt that when he spoke, no-one would listen or believe him. He sought a means to rebel in a non-violent way, which is certainly laudable. He took to the streets to make his voice heard. By his description, he began his mission at age 9, with buckets of paint and brushes in hand, targeting trains and walls throughout Bristol. He began as a freehand graffiti artist. After far too many close encounters with getting caught, he realized that to continue to "be heard" he needed to SIGNIFICANTLY reduce the time it took him to drop his messages onto his targets. During one such brush with the law, while hiding from authorities beneath a train for quite some time, he noticed stenciled letters on its surface and had an EPIPHANY! He could transform his method from buckets and brushes to stencils and spray cans. This was revolutionary for him and enabled him to slowly and laboriously design stencils at his workshop and then to very quickly and elusively drop his message at opportune times. He had a particular knack for strategically placing his work in the most optimal locations to be viewed by his target audience. He knew at a young age that PLACEMENT was as crucial as the MESSAGE! Sometimes pictures, sometimes words ... he made an impression on those that glimpsed his work.

What are his messages?

Banksy is most commonly referred to as a political activist, but I believe he is much more than that. Upon reviewing his art, it is clear that he rebels with his spray cans and stencils against many forms of injustices and imprisonments, be they psychological or physical. His message is anti-violence, anti-war, anti-avarice, anti-authority, anti-political injustice, anti-social inequality, anti-big business, anti-advertising, anti-branding, anti-corporate manipulation, anti-capitalism, anti-consumerism, anti-elite, anti-privilege, anti-wealth, anti-zoo, anti-bullying ... and he sprays his street art, liberally, to consistently pound these messages. With gutsy chutzpah, he is not afraid to speak his mind. He is unapologetic for not being "politically correct" and through his art unveils many uncomfortable truisms. He articulates a lot of things that many people are thinking but who may not have the wherewithal, courage, tools, or ingenuity to say. I respect that he is willing to call things out, frequently for what they are, and doesn't allow the pressure for "political correctness" to hamper his expression. Consequently, many of his works were destroyed, painted over, or confiscated by the authorities.

Assuredly at an earlier point in his career, Banksy brilliantly stated, "It is frustrating when the only people with good photos of your work are the police department." 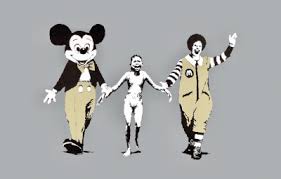 What is his fascination with painting rats?

There are some recurring figures and themes in his repertoire, such as monkeys, smiley faces, Bobbies, children, and rats. Banksy rats seem to be particularly notable throughout his messaging. He indicates that he paints rats because "they are dirty, insignificant and unloved yet they are capable of bringing entire civilizations to their knees." Such symbolism, I believe suggests that he identifies with and roots for the underdog and the disadvantaged. He envisions a time that the “vermin” will one day rise to the surface and have their moment. Does he see himself as vermin, too??

In 2004 at the Natural History Museum in London, he elusively and undetected, managed to hammer a nail into the wall, and display his work titled 'Pest Control'. He labeled the description as follows. "Termed the Banksus Militus Vandalus they are impervious to all modern methods of pest control and mark their territory with a series of elaborate signs."

In similar stealth fashion, he entered famous art galleries, evaded tight security, and managed to hang his work alongside those of Monet, Picasso, Warhol, and the like. He has successfully executed this stunt in the world-famous Louvre, the Metropolitan Museum of Art, the MoMA, the Brooklyn Museum, the British Museum, and the Tate Museum earning him global recognition. Sometimes his satiric works eluded the museum authorities for a mere 2 hours, other times for 2 weeks!! A few of his contributions managed to stay in the museum's collections, but most were removed. 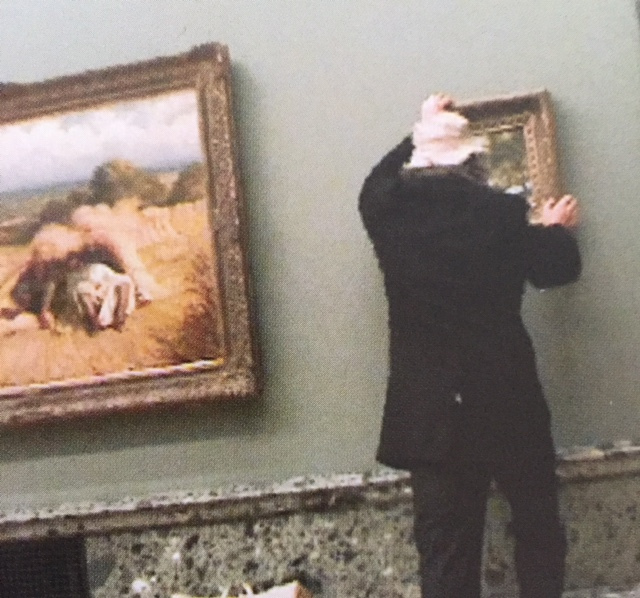 In 2018, the brilliant prankster pulled off the ultimate prank, calling into question 'Who does art really belong to?' In keeping with his distaste for art galleries and private collections, he installed a shredder into the frame of one of his paintings, titled 'Girl with Balloon', scheduled to be auctioned off. Upon the final strike of the auctioneer's gavel, the painting immediately fell victim to the jaws of the shredder, in attempted self-destruction. Banksy's stunt backfired, however, as it didn't completely shred the painting and managed to more than double its value. His piece sold for $1.4 million at Sotheby's auction house, although Banksy originally intended this piece to be inexpensive art for the masses!

His distaste for gallery art stems from his belief that such art is elitist, pretentious, intimidating, unapproachable, and exclusive. He is frustrated that the "success" of a gallery piece is determined not by the people, at large, but rather just a privileged few who create, promote, sell, purchase, display and decide its worth. He feels that "when you go to an art gallery you are simply a tourist looking at the trophy cabinet of a few millionaires." Street art, on the other hand, (which is actually different from graffiti) is driven by the people and belongs to the people. It represents the pulse of society and captures what is going on at the moment. Banksy views himself as the 'people's artist.' He feels that street art, as opposed to gallery art, is relatable and unintimidating. It is accessible for ALL to view and does not make one feel stupid. It speaks to people of ALL colors, races, creeds, genders, and ages. It is meant for all! Banksy's art, in particular, uses iconic imagery in a clever, witty, funny, radical, well-executed style and most often makes a calculated social or political point.

How best to view his art?

Given Banksy's aversion to art galleries, it is difficult to view a collection of his works. Occasionally, exhibits do arise, as I happened to stumble across one in Lisbon, Portugal last October. I inadvertently got off at the wrong bus stop and, lo and behold unbeknownst to me the Banksy exhibit, 'Genius or Vandal?', was directly in my view. Imagine my excitement!! Not surprisingly, such exhibits always stipulate that they are not authorized by Banksy and not curated in collaboration with him. Nonetheless, the artworks are originals and on loan from private collections. There are two exhibits of Banksy's works currently on view. One is 'Banksy Laugh Now' at the Moco Museum in Amsterdam and the other 'The Art of Banksy' in South Kensington, London. Seek them out, if you are there! Of course, you can find many of his paintings and messages splattered across the globe, with concentrations in London and Bristol, UK.

One other area that yields a high concentration of his works is in the West Bank, Palestine. Banksy has taken an interest in the Middle East conflict and has made significant artistic contributions to the separation wall between the West Bank and Israel. His art, there, is most noted in Bethlehem and Ramallah. In fact, there is even a hotel that he opened in Bethlehem, where you can actually stay, called the 'Walled Off Hotel'. It is advertised as having the "worst view" and features many murals within it, painted by Banksy himself.

In summary, Banksy is a free and creative thinker. He doesn't constrain himself to conventional rules. While his message seems to be consistent and predictable, his movements and timing certainly are not. His anonymity only adds to his allure! He has become the world's most famous street artist of our time and his works sell for millions! Hollywood movie stars, entertainers, and the wealthy elite clamor for his pieces and are very willing to pay a hefty price. Banksy's art has become an inescapable part of the overinflated commercialism and celebrity of the mainstream art world. It is truly IRONIC that his art fell victim to what he most rebels against and detests ... notably to be a showpiece in the private collections of millionaires.

While some have come to appreciate his talent and focussed messages, many still view him as a vandal. But how does Banksy view himself?? If indeed, he viewed himself as vermin, I think we can all agree that his moment HAS arrived!