Crêpes, savory or sweet?? You pick!

While many people rightfully equate crêpes with the French, they are also commonly made and enjoyed in countries throughout Eastern Europe and the Balkans. Growing up, my Hungarian mother made crêpes quite frequently, and now I continue that tradition. Hungarians call crêpes, 'palacsinta.' They are very fast and easy to make and can be assembled with either SAVORY or SWEET fillings. Hence they are versatile as an appetizer, an entree, a mid-day snack, or a dessert. In this blog, I want to show you how to easily make crêpes at home, as well as share with you two savory and two sweet filling options that my family enjoys.

Crêpes essentially are very thin pancakes made with a batter that is poured onto a sizzling hot surface. After about 30 seconds they are flipped, cooked for another 30 seconds, and are then ready to fill! Crêpes originated in Bretagne (Brittany) in northwest France in the 1100s AD. They were originally made with buckwheat, as that grain provided high protein and fiber to the people of that region. Bretagne is a harsh, rocky environment that was not hospitable to much agriculture. The ground buckwheat was mixed with water and a bit of salt to create a nutritious batter. Certainly, crêpes have evolved over the centuries much to our culinary delight. They are now made with wheat flour, instead. Milk, eggs, and sometimes even oil/butter have been added to the batter to yield a very tasty pancake. But what really makes these crêpes so delicious are the fillings! Common fillings at French crêperies are Nutella, chocolate, fresh seasonal fruit, often topped with whipped cream, powdered sugar, or nuts. It's probably fair to say that what crêpes lost in nutritional value, through their evolution, they gained in their flavor composition. 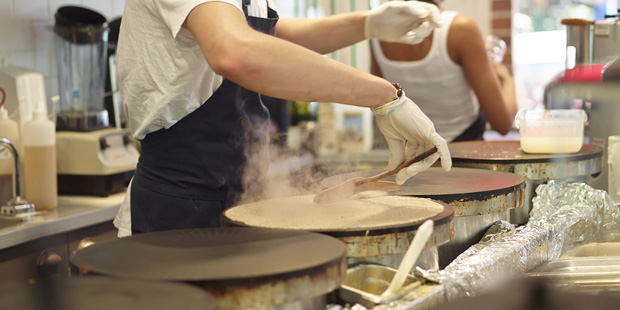 What tools do you need to make Crêpes?

Throughout France crêperies are commonplace. Crêpes are sold both as street food as well as restaurant fare. At professional crêperies, the crêpe chefs pour the batter onto round, flat, sizzling hot surfaces of about 13-16" diameter. They use a flat-edged wooden spatula to spread the batter evenly across the surface and also to flip the crêpe. While such crêpe making apparatuses are available for consumer purchase, most people use skillets for home use. It is very important, however, to have the "right" crêpe pan to significantly lessen the likelihood of your crêpe burning or sticking. A good crêpe pan should have a thick, smooth bottom and walls for even heat transfer. It should also have low walls to make it easier to flip the crêpe. Since the pan will need to be very hot, it is important to have a handle made of a material that resists the heat. Regarding size, 8-10" diameter is ideal. If it's much smaller then the crêpes are hard to fill and fold. If it's much larger then the crêpes are hard to flip and evenly heat. Another tool you will need is a long, flat, thin spatula, about 1" in diameter. Cooking crêpes over a gas stove is ideal, for the temperature of the skillet needs to be "just right" for the crêpes to cook properly without burning. A gas stove is far more responsive to subtle temperature adjustments, compared to an electric burner.

When reviewing recipes and cookbooks, you will find MANY different recipes for the crêpe batter with different ratios and quantities of each ingredient. Each chef has tweaked their recipe in ways that work for them. All typically include eggs, milk, flour, and salt. Where I notice variability is that some add butter, others canola oil, and still others club soda or seltzer. For the dessert crêpes, sugar can also be added to the batter to sweeten them slightly, or vanilla to provide a subtle vanilla flavor. In the end, you aim to make a thin, light batter that won't stick. The recipe that I use, which was what my mother and my grandmother both used, utilizes club soda, no butter, and no sugar.

club soda, enough to yield an "eggnog consistency" (this ingredient is not something I measure out exactly)

Combine eggs, milk, flour, and salt into a mixing bowl. Mix on high with a hand-held mixer. Slowly start adding the club soda until the batter is of "eggnog" consistency. Mix until batter is even throughout and not lumpy.

Heat the crêpe skillet until very hot. Put a small amount of canola oil into the pan. Add about 3/4 ladleful of the batter to the hot skillet. Swirl around to create a thin, even layer across the bottom of the pan and a little up the sidewalls. Wait for 30 seconds for the crêpe to cook. Flip and wait for another 30 seconds to cook the other side. Slide the crêpe out onto a plate, where you can stack them on top of each other. Prep skillet for next crêpe until batter is completely used up.

When most people think of crêpes they usually think of the sweet varieties, which I will get to shortly, but savory fillings can be truly divine. Steak, ham, chicken, seafood, mushrooms, cheeses, eggs, peppers, onions, and more, can all be tucked or rolled into a crêpe to yield a hearty breakfast, brunch or meal. My personal savory favorites are ones filled with chicken paprikás or ground ham. Last week I blogged about how to make Chicken Paprikás. So now I will build on that recipe and incorporate the chicken paprikás into a crêpe filling. This is stylistic of a crêpe that is popularly found on Hungarian menus, called 'Hortóbágyi Palacsinta' (or, Hortóbágyi crêpe). Often intended to be an appetizer, it is certainly hearty enough to suffice as a main entrée. By its strictest sense 'Hortóbágyi palacsinta' is considered to have a filling made of veal, but with an analogous paprika sauce to that found in chicken paprikás. In Hungary, I have eaten it with veal, as well as with a chicken filling, but both with a comparable paprika sauce. I assemble MY 'Hortóbágyi palacsinta' as an extension of my Chicken Paprikás.

The ham filled crêpes that my family enjoys consist of ground ham bound with sour cream, black pepper, and some grated parmesan cheese. These crêpe rolls are then topped with a dollop of sour cream. While I have traditionally incorporated grated parmesan into these crêpes, I think they would be equally delicious with shredded Gruyère cheese and possibly a Hollandaise sauce. Yummy!

Prepare Chicken and Paprika sauce, as detailed in my blog for Chicken Paprikas

De-bone and shred chicken meat. Mix with some of the prepared paprika sauce to bind the shredded meat together. Place a couple of spoonfuls of the mixture onto the center of a crêpe. Fold in the top and the bottom of the crêpe, and then the two sides to form a rectangular pocket. Lay in a lightly-oiled baking dish alongside each other with the seam-sides down and place into the oven at 350 F for about 30 minutes to heat up the filling. Once warmed, plate the crêpes and pour some remaining warm paprika sauce over the top. Garnish with a dollop of sour cream and some parsley.

Cut the ham into chunks, then grind the chunks in either a meat grinder or a food processor. Add a few tablespoonfuls of Parmesan cheese. Grind in some black pepper, to taste. Add enough sour cream to bind the ingredients together. The mixture should be easily spreadable.

Fill each crêpe by spreading the ham and cheese mixture lightly across the surface of the crêpe. Gently roll up the crepes, like cigars, and lay them alongside each other into a lightly-oiled baking dish. Place into the oven at 350 F for 30 minutes to heat up the filling. Once warmed, plate and garnish with a dollop of sour cream and a sprig of parsley.

Sweet crêpes are what come to mind when most people think about 'crêpes.' They may recall treating themselves in Europe to warm, fresh crêpes hot off the griddle, filled with fresh fruits or Nutella and doused with chocolate, nuts, shredded coconut, or some other sweet delicious topping. Sweet crêpes make for a wonderful dessert or a sweet mid-day snack and pair perfectly with coffee. I particularly like simple jam-rolled crêpes, with strawberry or apricot preserves. Another tasty sweet crêpe commonly found in Hungary is one filled with a sweet cheese filling.

Make crêpes as described above. Lay a crêpe on a plate. Spread jam thinly across its surface. Roll up like a cigar. Sprinkle with either powdered sugar or ground walnuts. Can serve with a dollop of whipped cream or a scoop of vanilla ice cream. A decadent dessert doesn't get easier than that!!

Begin by soaking the raisins in rum in a small bowl. Meanwhile, combine the 2 egg yolks with 1/3 cup powdered sugar and the packet of vanilla sugar in a mixing bowl. Beat the ingredients together and then add the Farmer cheese, the Ricotta cheese, and the lemon zest. In a separate bowl, beat the 2 egg whites until stiff, then add 2 Tbsp of powdered sugar. Fold the egg whites into the cheese mixture. Drain the rum-soaked raisins and gently fold into the mixture.

Lay a crêpe on a plate and place a couple of spoonfuls of cheese mixture onto the center of the crêpe. Fold in the top and the bottom of the crepe, and then the two sides to form a rectangular pocket. Lay the rectangular pocket into a buttered baking dish with seam-side down, alongside each other. Place in oven at 350 F for about 30 minutes until the filling warms up. Once warmed, plate and sprinkle with powdered sugar.

I hope I have enticed you to give this quick, versatile treat, a try. Mix up some batter and practice making a few. The more frequently you make them, the easier they become. Start with simple fillings and expand upon them with more complex flavor combinations. They look impressive, taste delicious, are easy to assemble, and can be used for any type of meal. Lastly, when you come across a crêperie in your hometown or during your travels, don't hesitate to stop in and order one ... or two. 😉 There, the options seem endless! 😋