The Hagia Sophia, a cultural landmark!

One of my favorite paintings at our Louisville Speed Art Museum is an oil on canvas of the Interior of the Hagia Sophia by John Singer Sargent. He was an exceptional portrait painter in the late 1800s to early 1900s, but also excelled at landscapes and watercolor. (I plan to feature him in his own blog soon, so stay tuned!) This Impressionist-style painting at the Speed, which is one of only three of his works in the Speed's collection, happens to be of a monument and not a portrait. In 1891 his travels took him to Istanbul, Turkey, and its Hagia Sophia. There, with glorious golden tones, he captured the radiance, grandeur, and divine serenity of the beautiful Hagia Sophia in the early morning sunlight.

Why is the Hagia Sophia such a Treasure?

The building's architecture certainly reflected its special status. The architecture of the Hagia Sophia is renowned for the way it masterfully captures natural light. Gold paneling and mosaics on its walls and domes, along with innovative design fill the spacious interior with natural lighting. Its grand dome, measuring 108 ft in diameter with its crown rising 180 ft above the pavement, ultimately rests on four great marble piers. Beneath the lofty cupola are 40 windows that allow the sunlight to suffuse the interior and irradiate its gold mosaics. The luminous effect of the natural light on the interior space is what inspired awe in the worshippers. The cathedral has two levels, a vastly open ground floor and a second floor with galleries. Having two levels may suggest that people were organized either by class or gender during times when services were held. The Hagia Sophia was actually the third church built on this site which originally housed a pagan temple.

The first church on this site was MUCH smaller and commissioned by Emporer Constantius II in 360 AD after his father, Emporer Constantine I, proclaimed Christianity as the official religion of the Byzantine Empire. That church featured a wooden roof and the church burned to the ground in riots of 404 AD. Then, a second church was built over the same site and succumbed to the same fate during the Nika riots of 532 AD that nearly destroyed Constantinople itself. Emporer Justinian I called in his troops to put an end to those riots.

Thereafter, Justinian built the magnificent cathedral on that same site, the Hagia Sophia (meaning 'Holy Wisdom'), which still stands today. He created this spectacular monument in five short years beginning in 532 AD as a testament to his power, wealth, and authority, not only over the Empire but over all of Christianity. In an effort to represent ALL of the Byzantine Empire, Justinian decreed that all provinces under Byzantine rule send architectural pieces (raw materials) to be incorporated into its construction. Marble and porphyry slabs and columns, precious stones, terra cotta, gold, silver, bronze and glass arrived to Constantinople from Anatolia, Syria, Levant, Egypt, North Africa, Ephesus, Greece, France, Italy, and from throughout the Empire. These materials were incorporated into the domes, walls, floors, columns, and decorative mosaics. The ORIGINAL mosaics in Justinian's Hagia Sophia DID NOT feature images of the divine but rather depicted floral and geometric designs along with simple Christian symbols like crosses and fish, as shown in the picture above. These original mosaics have all been largely lost. Interestingly, the FIGURATIVE mosaics that now adorn the interior, illustrating the Virgin Mary, Jesus, saints, many biblical scenes, figures from the Gospels, angels, and even emperors or empresses, were not added until after the Iconoclast movement ended, at about the first half of the 9th century. Much of the Hagia Sophia stands today as it was constructed in the 6th century, with the exception of the original dome which collapsed in 558 after a series of earthquakes and the later 9th century restorations during which the original mosaics were replaced.

(Below; the first picture is an artist's rendition of how the exterior of the Hagia Sophia was envisioned to look prior to it becoming a mosque. The remaining photos show how it appears today.) 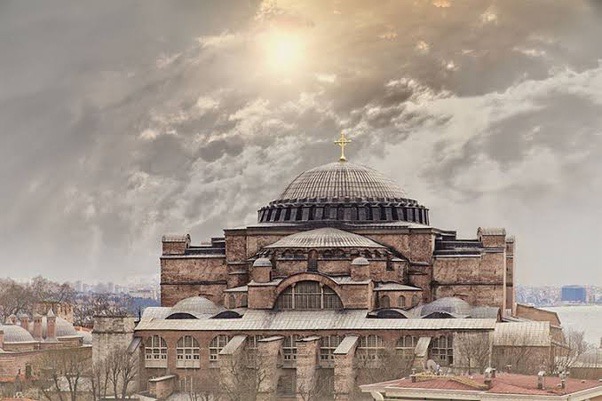 The Re-purposing of a Byzantine Cathedral to a Mosque

Once the Ottomans conquered Constantinople in 1453 AD they changed the name of the city to Istanbul. At that time Sultan Mehmed II had the Byzantine Hagia Sophia cathedral repurposed as a MOSQUE, (but didn't change its name, merely adapting it to a Turkish spelling of 'Ayasofya'). It functioned as a mosque for just shy of 500 years. In doing this, several structural alterations needed to be made. Interiorly, a grand chandelier was incorporated, a Mihrab (prayer niche) facing Mecca was installed at the front of the mosque, Golden Arabic inscriptions were added to cover some Christian mosaics, large circular medallions with the name of God, the Prophet, and His companions were added, a Muezzin Mahfili was added in 1560 to call the believers to prayer inside the mosque, a minbar (pulpit) was erected to allow for better visualization of the imam, and rugs were laid down over the marble flooring. Exteriorly, further additions were made. One minaret (the red brick one) was immediately built onto the exterior by Mehmed II to allow for the summons to prayer. An Ablution fountain was also constructed outside of the complex. Later, three more minarets were added to the exterior by subsequent Ottoman Sultans in the 16th century. 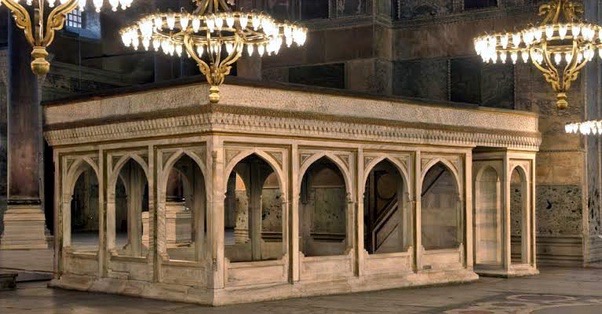 Upon the conquest of Constantinople by the Ottomans, the Turkish conquerors immediately sacked the Hagia Sophia. They pillaged the complex, killed those seeking refuge within it, and looted valuable items that were easily removable. Sultan Mehmet, however, was a 'man of the Renaissance' who recognized the greatness of the Hagia Sophia. He quickly took ownership of the Hagia Sophia as HIS personal property and in the new deed established it as a mosque. Nonetheless, he recognized the artistic value of the Byzantine mosaics, protected them, and allowed many of the finest mosaics to remain, including the Virgin Mary and some seraphs, despite having converted the Christian cathedral to a mosque. In fact, for at least the first 260 years (and probably closer to 300 years) after the Hagia Sophia was functioning as a mosque, the beautiful Byzantine mosaics remained mostly UNCOVERED. This is evidenced by drawings made of the interior of the Hagia Sophia by Grelot in 1680 and then by Loos in 1710, as shown below.

It wasn't until the late 1700s that the Byzantine-era interior mosaics of the biblical figures were removed, destroyed, or plastered over because they violated Muslim proscriptions against the depiction of living beings, The details of exactly when and who ordered them to be covered are unknown. In the Islamic faith, it is believed that the image of Allah or the Prophet cannot be figuratively captured by the human hand. Therefore, mosques, domes, prayer rugs, and Qurans are typically decorated with Arabic inscriptions, calligraphy, geometric patterns, stellate or floral motifs, and vegetal patterns.

The Secularization of a Landmark

Shortly after the Ottoman Empire came to a close at the end of WWI in 1920, the independent Republic of Turkey emerged. Mustafa Kemal Atatürk abolished the sultanate and became Turkey's first president. He proceeded to rebuild a SECULAR republic and a modern Turkey enacting reforms to westernize the country. The Byzantine mosaics remained covered until 1931, the Secular Period, at which time the Hagia Sophia BEGAN a restoration and recovery effort of the remaining mosaics. In 1934, following a cabinet decree, Atatürk secularized the monument of the Hagia Sophia and converted it into a MUSEUM. It has functioned as a nondenominational cultural landmark since that time to the present, for the past 86 years. It was during these years that the Hagia Sophia has undergone extensive restoration, uncovering its many mosaics and frescoes. Patches of moisture, peeling paint, layers of grime, plastered-over mosaics, and bricked-up windows all needed to be restored and rejuvenated by conservators. It has been a many decades-long process that is still underway. In 1985 the Hagia Sophia was inscribed on the UNESCO World Heritage List as a historic landmark in Istanbul. During its time as a museum, admission fees were charged and it was open to all visitors. For the past several years the Hagia Sophia Museum hosted about 3 - 3.5 million visitors annually.

Re-purposing again to a Mosque

Atatürk's secularization of the country has been a thorn in the side of the fundamental, nationalistic Turkish people for many years. They felt that the SPIRIT of the Ottoman Empire has been muzzled or lost and that the country was bowing to Western pressures. A few of weeks ago on July 10, 2020, current Turkish President Erdogan addressed his nation and issued a decree to annul the decisions of 1934, subsequent to rulings made by Turkey's high court. Erdogan re-designated the Hagia Sophia as a MOSQUE, in accordance with Sultan Mehmet's deed from 1453, to once again open it for Muslim prayers. It is still too early to know the extent of interior modifications that will ultimately be made to the Hagia Sophia, but recent news stated that curtains were installed to intermittently hide the faces on the mosaics during the times of Muslim prayers. Carpet was also laid down however, the square-shaped area where the Byzantine emperors were coronated was left uncovered, to respect the historical legacy. Turkey's Culture and Tourism Ministry will continue to supervise restoration and conservation works and affirmed that the mosaics will not be permanently covered. As with other mosques, such as the Sultan Ahmed Mosque (The Blue Mosque) next door, it will be open to the public in between prayer times and there will be no admission fee. The Hagia Sophia Mosque re-opened to the public on July 24, 2020.

Without question, this is an emotionally charged topic, as are all topics that involve political, nationalistic, or religious ideologies. I feel very fortunate to have had the opportunity to visit Istanbul and the Hagia Sophia last year. I wanted to share with you its rich and tumultuous history and expose you to the true treasure that the Hagia Sophia was, is, and WILL ALWAYS BE!